My review of this novel for juveniles is a mixed review. The story line for the first half of the story parallels with a famous series of novels of a young wizard whos parents were killed when he was six. The author did change several key elements of the story to keep it from being a work of plagiarism. Once the author allowed the characters free rein of how the story would develop it became better. It does need to have a total barrage of editing done to tighten up the story.

The story opens with a sprite flying through the universe being drawn to Earth by a blast of Wild Magic. When Sky reaches Earth, she discovers a battle between a family and a demon. Just as the demon murders the parents, Sky wisps away the small boy from the evil grasp of the demon.

After rescuing the small boy, Sky spirits him away to the world of Alure, home of the elves, to her elf friend Soone. Soone keeps the boy for a year teaching him magic as he tries to remember why he was not destroyed with his parents. The events of that day is a total blank.

Fast forward eight years to the cloister town of Hope. Twins, Ann and Mark Tuttle are practicing cloaking outside which is against the Town Council rules. They obverse a moving van at the old King house that has been vacate since the accident that killed their friend Ben and his parents. Everyone except Ann believes this to be true. Ann on the other hand, hold on to the believe that Ben is still alive.

Soon her belief is proven to be true as Ben King comes home along with his werewolf and vampire foster parents, Moco and Amanda Richard. Ben has been living with the Unaligned wizards in the normal regions of the US. Ben has came home to find out what truly happened eight years ago. The Tuttle family is ecstatic to have Ben back in their lives. However, much of the town is not in agreement with the Tuttles. The town of Hope has cloistered itself from the rest of the US to hide the fact of its residents having magical abilities. Council chairman, Horace Grimm Jr. is leading the opposition of allowing Ben back into the community. Evil is spreading consuming life /earth magic and Horace Grimm tries to lay the blame on Ben.

Ben and his friends must unravel his past to save the world and universe from being consumed by evil.

I give this novel a three and a half stars. With proper editing done it would be raised to four and a half stars. You can find Apprentice Wizards of Hope at the following link: https://www.smashwords.com/books/view/740267?fbclid=IwAR1B_3ut1pLw4KYMyo0Tn3ypE1MKx91exYPeLv-gjKDyrZAzmrL_UHUB8Uk

Bryce Jarrett’s documentary brings to light what really happens when an author strikes out on their own to bring their work from an idea to published work and beyond as an Indie author instead of traditionally published.

Watch it at the following link:
https://youtu.be/c_ye5U2MRek

The author throws her protagonist head long into the unknown right from the start of the story. Sybel, a simple farm girl watches her mother’s life being taken by a wasting away disease. At her mother’s funeral, her father accuses Sybel of being the cause of her mother’s death. Hatred fills his heart as he shoves Sybel into the funeral pyre to kill her. Only the fire doesn’t consume her it wraps around her bathing her in flames. She walks out of the pyre unharmed only to find that the whole village has now turned against her because she is a mage. Sybel must flee to find the answers to her life to the mage city of Kemoor. The reader is drawn in as Sybel searches for the answers for her life, making the reader wanting more as the book ends as she reaches Kemoor, to continue in the next book.

You can find more about Crissy Moss at

The main protagonist, Coach Mike wakes up August 8, 2022 to find nothing working, no electronics period. Nothing from a flashlight to any utilities working in town. The word of mouth information has it that the military will be evacuating the town of Storm Lake by sundown. The military arrives in antiquated vehicles not seen since the Vietnam War.

The first thing the military does is throw up a barb wire fence around the town. Then the evacuation starts. The military separates the town’s people into two groups, one group to green transport trucks and the other into a fenced in pen. Then they are gone with no explanation on what happened, leaving them in the pen.

After escaping the pen, those who are left decides to travel to the military base at Fort Dodge to find their families and answers. They must travel at night because the sunlight now burns their eyes. All process food is contaminated. The only things palpable is water, alcohol, and fresh meat. The trip is taking a toll on them, they are wasting away. In between them and their objective is the Swift. The Swift appeared shortly after they start the trip. The Swift is a group of vicious, brutal, creatures that are lightening fast with hands of sharp claws. Some can breathe fire. You shutter when you hear their high pitch screams knowing death is close at hand.

The story will draw you into the adventure and terror as Coach Mike strives to be united with those he loves. The ending is a fantastic twist to the story. No spoilers here. You have to read the novel to find out what Coach Mike finds out what actually happened to them.

You can find out more about Ricki Dragoni at the following links: https://book2read.com/r/B-A-HRGE-CYES https://www.rickidragoni.com https://facebook.com/ricki.jimenez.564

You can find out more about Ricki Dragoni at the following links: https://book2read.com/r/B-A-HRGE-CYES

I just finished the novel ‘Ripples’ By Ricky Dragoni. The story is a Sci-Fi thriller worthy of being a Night Gallery or Twilight Zone classic. The story opens up in the year 6749 where humanity has genetically engineered itself to be perfect. Humans are no longer born, they are harvested after the parents have the geneticist program from a limited DNA pool specifications what they want in a child. They live perfect lives for 200 years then they are recycled. Jordan is such a human. Jordan’s parents chose curious, creative, structured, and unconcerned. This combination set Jordan apart from the norm. As Jordan grew up, the others were always asking if Jordan was truly engineered or was Jordan a Random.

Jordan is a temporal scout for the KronoCorp on the San Andres Island. Joran scouts different periods of time to determine the value of the period of time and safety for visitation by the Civilization. Jordan viewed humans of the past as primitive, weak and vestigial remnant until Jordan encountered an elderly couple on the subway in the year 1979. The couple’s devotion and love for each other sparked a yearning within Jordan to start a quest to create the butterfly effect. Now Jordan must carry out this mission in secret so the auditor does not catch on to the ripples in time and stops Jordan.

Hi everyone. I treated my husband and myself to a day out with a new restaurant yesterday. If you know my husband you know when it comes to eating out he pretty much stays in a rut on where to go to have dinner.

After walking through the German fest we decided to go out for dinner. My husband’s suggestions Arby’s, Hardies, etc., get the picture? I retorted that he was in a rut and we should try something new. He gave me that look of what have you got up your sleeve now? My answer was let’s try that dumpling restaurant over in East Village.

Since I couldn’t quite remember the name or the exact address we spend about ten minutes driving around East Village looking for the restaurant. We pulled over to try and google it on his phone. Low and behold I find out he deleted his WIFI connection on his phone so there we sat as I tried to remember where it was located and he sat behind the wheel wanting desperately to go to a fast food joint. I finally remember it should be around 3rd or 4th Street in between Walnut and Court. As we buzzed by 3rd I saw Molly’s Cupcakes and a sign on the building across the street from it. I had him drive around the block so we could investigate. He of course tried to turn the other way on 3rd but we finally arrived at our destination, Dumpling Darling, 212 East 3rd Street, Des Moines, Iowa. We got there around two pm. which turns out to be a good time because the dinner crowd is gone and there was only one other couple having dinner. Yes I am from the old school of the mid-day meal is called dinner not lunch and the evening meal is supper.

I ordered the Lesley’s lamb steamed dumplings and my husband ordered the potato perogies with bacon. The soft drinks are from Tractor Beverage company so no Pepsi or Coke produces served here. 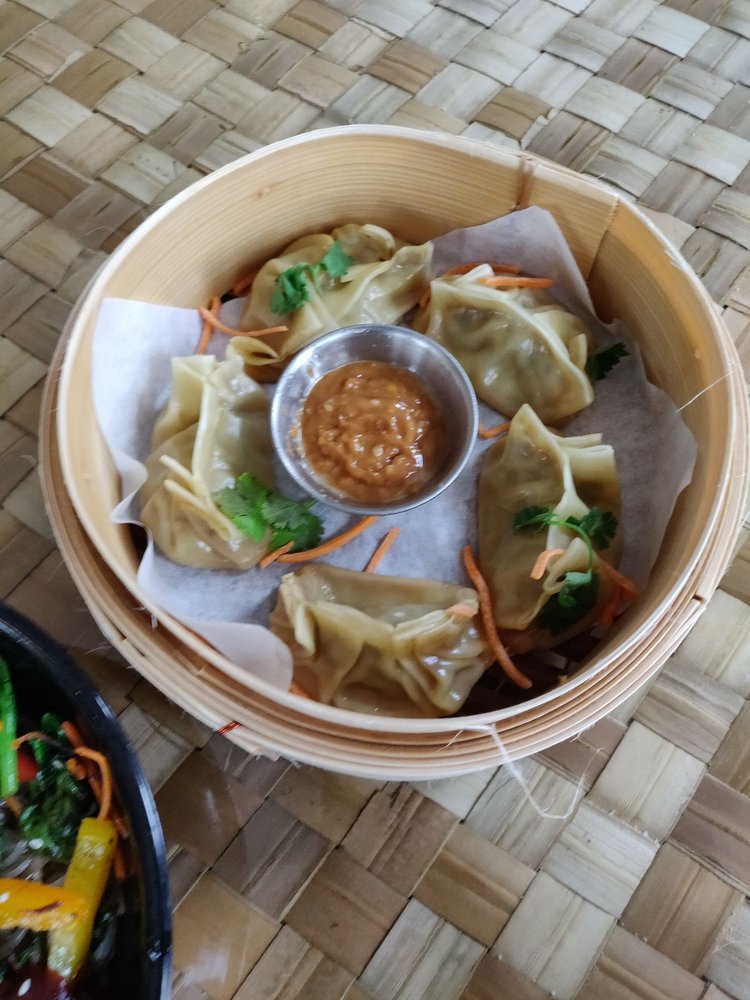 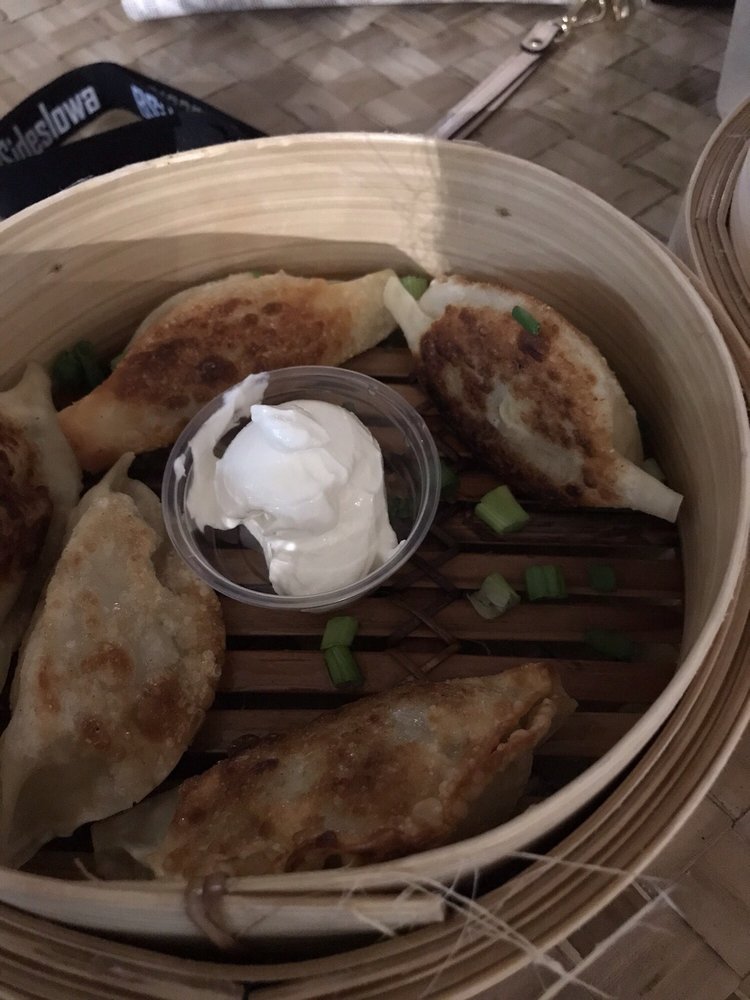 They served the meal under ten minutes. The food was delicious and I wished that we had more people in our group so we could have ordered the Mega Flight which is four of each of the steamed and fried dumplings they serve, forty dumplings in all so I could try a variety of dumplings.

So if you want to try Dumpling Darling I would suggest going in the off hours like we did so you don’t have the crowd to deal with. I give it four out of five stars. 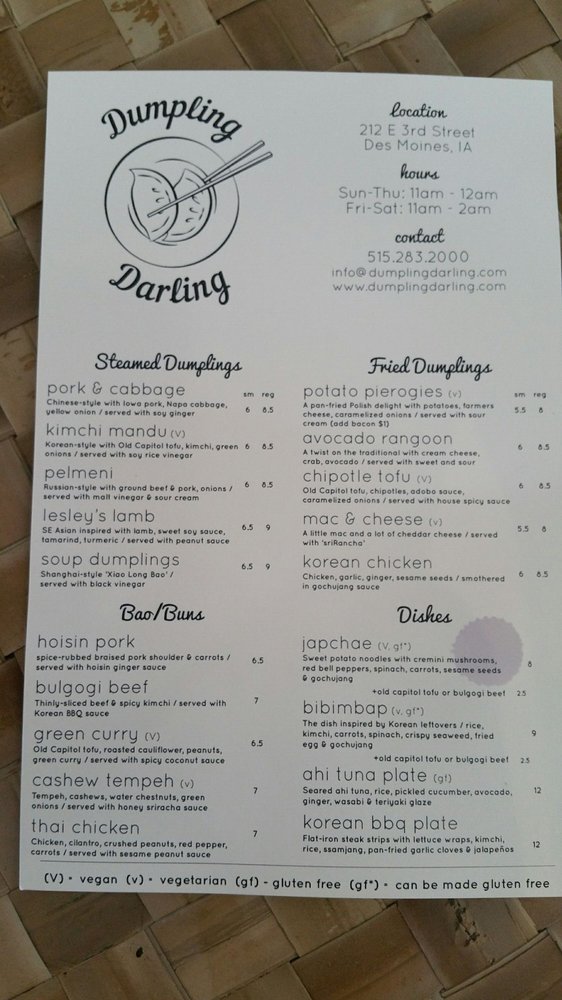 Great Read for YA Through Adults

I liked this series. It is base on the 6000 year old  apocalyptic story of good vs evil.  It starts out with a run on sentence lasting a full paragraph describing the Second Death. The Second Death is a dimension made by the Creator for the Fallen, those who rebelled against the order of the Cosmos.

Jessie Hailey, a sixteen old with an alcoholic mother, hears a voice offering her a way out of her abusive live and power so she would be no one victim any longer. She starts out on a journey to release three Fallen or as the world calls them demons to help her release Nalsuu, Father of Darkness and Chaos. He has chosen her to be his queen.

Those who would stop her are the Watchers, half-breeds, descendants of the joining between the Fallen and humans. They will be lead by the Chosen One to stop this apocalyptic from happening.

It is a story that moves back and forth in time telling the intertwining of the lives of the characters. You can follow the story line easily. It keeps you involved throughout the story coming to a drastic climax with an opening to continue the story.

I give it four stars.