Iowa Authore Fest will be at the covered bridge festival on the north side of the square in space N13 on October 12th and 13th, 9 to5 each day. Please stop by our tent and pick up our novels for your fall reading enjoyment. We will have several new authors with us this year. Alethea Cook will have her premiere novel ‘Just Wing It’ for your pleasure along with several new novels and colorbook from Iowa Author Fest regulars, Jordyn Meryl, Sue Raymond / Lady Landora, Larry Stumbo, Julie Hamm, LaVina Vanorny-Barcus, Kathryn Daugherty. 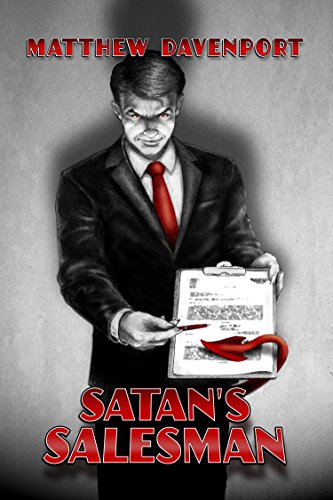 Matthew Davenport’s newest novel ‘Satan’s Salesman’ main character, Shane Lowe, is the top sales person of Computer Information Technology. He  always made over his sales quota. He keeps an engagement ring in the glove box of his Sebring waiting for the right time to propose.

Shane believes his ship has come in when Sara Durant, the Global Account Manager loses her job because of poor sales performance.  He is told that the position is his for the taking. He tells his girlfriend, Margaret ‘Maggie’ Powers and Dale Lawson, his best friend the good news. His ecstatic enjoyment is stalled when he has a confrontation with Sara Durant where she tells him she has a backup plan and is sorry. When Shane says she has nothing to be sorry her answer is ‘Yet’ with a ominous undertone.

The next day after Shane accepts the position he finds his stuff packed up in boxes outside his new office and Sara sitting in his chair. Shane storms in to find Sara gloating one minute and crying the next. Her backup plan has come in effect. She gives Shane a business card stating for him to call it, they grant wishes. On the card reads only Perdition Investments along with a phone number.

Shane is not one for phone calls when it comes to an initial meeting. He does a reverse search on the phone number and comes up with the address. Shane arrives at the address to find only an field filled with tall grass. Among the grass was a lone fence post with a carved wooden sign with Perdition Investments burnt in it nailed to it. Shane searches the horizon for any sign that the company ever existed besides the sign.

He turns back to his car to find a strange woman leaning against the Sebring. It turns out to be Sherri Webster, the Sales Manager at Perdition Investments. She seemed to magically appear out of nothing. Shane wants Perdition Investments to reverse Sara’s wish however, Sherri offers something better, a new job with limitless possibilities, the only catch is, it cost your soul. You can earn it back by saleing the same deal to others.

Matthew Davenport does a great job of weaving thrill and suspense throughout the story. It reminds me of a mixture of the Twilight Zone and the Outer Limits. I give it a four and a half stars, minus a half a star for language.

Everyone Come and Join in on the Fun for

It’s been an exciting year.

During our first year at Davenport Writes, we met with a lot of local Iowa authors. Each of them had a fairly simple dream:
They want you to read their stories.

And that’s essentially how our annual anthology was born. We’ve been collecting stories, editing, and working on cover art for most of the year (the idea began in May!) and now the culmination of that work is easy for you to pick up.

When you’re ready to meet some new authors, or visit with some old favorites, this new anthology is your doorway into their life.