The main protagonist, Coach Mike wakes up August 8, 2022 to find nothing working, no electronics period. Nothing from a flashlight to any utilities working in town. The word of mouth information has it that the military will be evacuating the town of Storm Lake by sundown. The military arrives in antiquated vehicles not seen since the Vietnam War.

The first thing the military does is throw up a barb wire fence around the town. Then the evacuation starts. The military separates the town’s people into two groups, one group to green transport trucks and the other into a fenced in pen. Then they are gone with no explanation on what happened, leaving them in the pen.

After escaping the pen, those who are left decides to travel to the military base at Fort Dodge to find their families and answers. They must travel at night because the sunlight now burns their eyes. All process food is contaminated. The only things palpable is water, alcohol, and fresh meat. The trip is taking a toll on them, they are wasting away. In between them and their objective is the Swift. The Swift appeared shortly after they start the trip. The Swift is a group of vicious, brutal, creatures that are lightening fast with hands of sharp claws. Some can breathe fire. You shutter when you hear their high pitch screams knowing death is close at hand.

The story will draw you into the adventure and terror as Coach Mike strives to be united with those he loves. The ending is a fantastic twist to the story. No spoilers here. You have to read the novel to find out what Coach Mike finds out what actually happened to them.

You can find out more about Ricki Dragoni at the following links: https://book2read.com/r/B-A-HRGE-CYES https://www.rickidragoni.com https://facebook.com/ricki.jimenez.564

You can find out more about Ricki Dragoni at the following links: https://book2read.com/r/B-A-HRGE-CYES

I just finished the novel ‘Ripples’ By Ricky Dragoni. The story is a Sci-Fi thriller worthy of being a Night Gallery or Twilight Zone classic. The story opens up in the year 6749 where humanity has genetically engineered itself to be perfect. Humans are no longer born, they are harvested after the parents have the geneticist program from a limited DNA pool specifications what they want in a child. They live perfect lives for 200 years then they are recycled. Jordan is such a human. Jordan’s parents chose curious, creative, structured, and unconcerned. This combination set Jordan apart from the norm. As Jordan grew up, the others were always asking if Jordan was truly engineered or was Jordan a Random.

Jordan is a temporal scout for the KronoCorp on the San Andres Island. Joran scouts different periods of time to determine the value of the period of time and safety for visitation by the Civilization. Jordan viewed humans of the past as primitive, weak and vestigial remnant until Jordan encountered an elderly couple on the subway in the year 1979. The couple’s devotion and love for each other sparked a yearning within Jordan to start a quest to create the butterfly effect. Now Jordan must carry out this mission in secret so the auditor does not catch on to the ripples in time and stops Jordan.

My stars on the review of Lucifer’s Star is a mixed one. The story is the after mass of Commonwealth vs Archduchy of Crius.

We find the main protagonist Cassius Mass Plantagenet living under the assumed name of Marcus Grav, navigator on the spaceship, Melampus. Marcus is hiding from his past. The Commonwealth branded him a war criminal with a price on his head while to the Archduchy of Crius, he is a war hero, the recipient of the Lucifer Star. Cassius is not the normal hero. His father had Cassius cloned from his DNA then enhanced Cassius with military grade cybernetics along with a cybernetic brain to go with it.

Because of these enhancements he is considered a low second class human by the Commonwealth, the Butcher of Kolthas, the Fire Count, and not considered much better by the Royalty of Crius.

How can Cassius survive his past? Who can he trust, his shipmates, Captain Ida Claire who is a Watcher, The Commonwealth, or Crius Reborn Movement? Each has their own agenda of getting their hands on Cassius.

On the story line, I give a resounding five stars. The authors did a great job weaving several different Sci-Fi concepts together drawing the reader into the story. On certain content of the story line because of my own preference, I give a solid three. If  the reader does not like the “F” bomb and certain life styles Lucifer Star is not for them. SO when you combine the stars and average it out the overall rating is a four star novel.

You can find Lucifer Star at the following:  https://www.amazon.com/Lucifers-Star-C-T-Phipps-ebook/dp/B01MDM9MCT/ 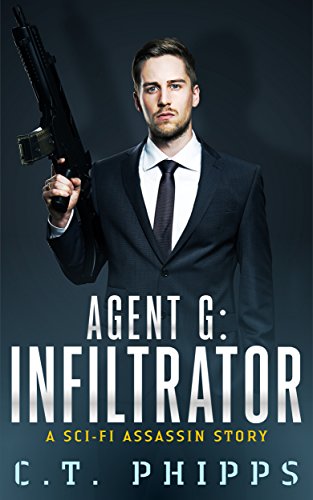 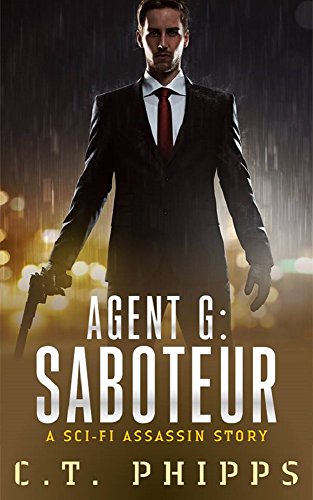 Here is the newest set of books I read by C.T. Phipps.  In book one, we find agent G sitting in a Mercedes Benz S-Klasse scoping out his next assassination assignment by his employer ‘International Refugee Society’. This International Refugee Society is a Black Opt business working in the shadows controlling the movers and shakers in the world governments. They recruit their agents and to make the agent the best they stripe the agent not only of their memories they take all emotions away as well. Then the company enhance the agent with IRD implant in the brain and other enhancements like quick healing and faster reflexes. Lastly the company takes their names replacing it with only a letter.

The company gives each agent an assistant to help control and complete the assignments. Agent G’s assistant is Marissa Sanchez, a recruited computer hacker from the Banio Maya or Los Mayans, the Mexican-American gang. G’s new assignment is to assassinate the head of rival ‘business’ the Carnevale in Italy, Caesar Lucio Biondi and his daughter, Lucita then rescue Dr. Marcus Gordon, lead researcher at Karma Corp Special Project Division. Dr. Gordon is the creator of ‘Black Technology’. Agent G is informed there is a mole in the company. He and his assistant is plunged into the unknown of who to trust.

In book two, ‘G’ is back  and things are in an up roar. ‘F’ was a mole then ‘G’ finds out his assistant is also a traitor. Can he rely on her and agent ‘S’ his undercover wife to unravel the mystery of the company or is he destined to fail on his newest assignment. ‘G’ is in a quandary of finding out his past, what he truly is, completing his assignment for the company and having a A.I. Super computer stored in his brain so it can escape the company into the world-wide web.

lives in Des Moines, Iowa with his beautiful wife, Ren. He spends his time writing, reading, and working to promote and support
writing communities in Iowa through his company Davenport Writes, LLC. You can keep track of Matthew through his twitter account @spazenport.
You can follow his blog at http://davenportwrites.com”

Karen’s new book published in January 2016 is Mystery at Burr Oak: A Dog Named Wang. It is a cozy mystery/romance inspired by her mother’s dog, Wang.  Another children’s book, she wrote with her 6 year old granddaughter, is currently in the publishing process (What Is That Strange Noise?).  She continues to work on a tween chapter book series and a historical Christian romance.

Iowa Author Fest promotes the creative arts of writing, painting, and music from Iowa. It will be held at Jasper winery, 2400 George Flagg Pkwy Des Moines, IA 50321
Phone number (515) 282-9463,  August 6th,2016. The hours will be 11:00 am to 3:00 pm. This year there will be twenty-five authors, a photographer, live music and food from local food vendors. Jasper winery will be selling wine by the glass as you listen to great music and buying the next novel from your favorite author. Iowa Author Fest is sponsoring a short story writing contest to Iowa high school students. top prizes will be $100, $75, and $50. The rules for the contest can be found at iowaauthorfest.wordpress…. Iowa Author Fest will be having a drawing for four gift baskets. One per hour will given away at 12:00, 1:00, 2:00 and 3:00 pm. You must be present to win basket. The authors will be reading from their novels every fifteen minutes in the barrel room. Come and join in on the great time with music, food and books.

Calling all readers to the Mega event being held for the next seven days by fellow blogger and author Marie Lavender. This contest starts January 15th at 12:oo PM EST and end the 23rd. You have a chance to win one of over one hundred books given by a variety authors of all different genres. There is no purchase needed to enter the contest. Go to the following link to read all about it and enter. I have entered already.

This trilogy is about the struggles of a young man Kai Drake loses his family after disaster Zombie virus turns the world upside down. A loner Kai travels trying to make sense of the senseless. Kai soon joins a group of people through a young lady by the name of Clover. Kai learns that not only is there zombies loose in the world but werewolves exist and is part of his heritage. They meet alien dragons and together they set out toward Butte, Montana. Along the way there sinister forces try to stop them and Kai’s past comes back to haunt him as his own brother’s name is stated to be behind horrible experiments on humans turning them into bizarre creatures half animal half human. Wendy and Charles Siefken is a mother and son writing team. Together they bring to life a world of sci-fi  fantasy filled with wonders.

This entry was posted in Reviews and tagged author, dragon, fantasy, sci-fi, werewolves.